Before we left for our first stop in Austria, we completely prepped the van. Emptied gray water, emptied the pee cartridge and top off the fresh water tank. We then drove off in the direction of Merano.

The plan had been to go to the Thermen in Merano. Paula had already seen that the Thermen had underground parking which would most likely not accomodate our 3.2 meter high van. We decided to try the parking lot in front of the railway station but that was completely full. So we drove on and followed signs for parking and hoped to find a spot along the street. We did pass the thermen but no luck on the parking spots and we ended up in a suburbs where the streets got tinier and tinier. In the end we gave up and rode towards Austria.

We used to route over ther Brennerpass which is busier but not as steep. The traffic was not bad and soon we were in Austria. In Austria you pay toll for the highways with a tool vignette. We had the 10 day version that costed around 10 euro.

We had picked a campsite just passed Innsbruck, on lake Agensee, which did not seem to far from the highway. Little did we know we had to climb substantially up to the lake and where stuck behind a slow truck. Finally we arrived. We had called ahead to reserve a spot, but it was on a first come first serve basis. So we were a little tensed to see if there was a spot available. Fortunately they still had one. We were just in time as when I came out of the reception a line of 3 just arrived campervans had formed.

Our luck didn't just stop there, turned out along the lake just 5 minutes walk from the campsite was a a huge thermen building with baths, saunas and fitness rooms. That is wherre we spend the rest of the day from 4pm - 9pm.

First we went into the outdoor pool, then we went swimming in the lake. We also ordered fries and drinks. That was followed by a aromatic sauna, a finnish sauna and a steambath. All and all a great day. Sometimes you just got to roll with it.

Before driving to Florence we decided to do a little bike ride along the lake. Originally thought to do a loop around the lake but that turned out not to be possible, as parts of the lakes opposite shore did not seem to have a road. So we did an out and bike of in total 12 miles.

We stopped along the way a few times. There were interactive features, one of the them had various musical instruments and there was also a waterwheel. At the turning point at the other end of the lake we stopped for a capucinno. We then headed back with the wind in our back.

The fastest route to Florence's house in Werfenweng was through Germany. But that route looked very busy. We had asked Florence for advice as she, a pre-sales consultant for Boston Scientific knew all these roads visiting the various hospitals in the area, She recommended a route along Skt Johann in Tirol, then Sell am See and then via Skt Johann am Pongau to Werfenweng. But first we had ride a bit on the highway to Munich, it was very busy and with the work on the road slow moving. But once we were of the Highway we kept rolling. I had stopped to top of the Diesel tank and at the gasstation bought a local snack. Leberkuchen in a roll. It was really good.

At around 3pm we finally arrived at Florence's. So happy to see eachother again after so long. Florence is expecting with only 1 month to go and it shows with a nice bump. We saw Seppi later when he arrived from work.

Florence and Seppi inherited an old house and are having it renovated. We went to see the house in Wagrain. It is huge with an attached barn. It was made in the 1924 with a block house design. The sun weathered the outside of the wood walls black. The renovation will start spring 2023.

I had brought my drone to takes some shots from the house. I flew it around the house to get if from different angles.

It had gotten hot and we drive to a lake called the Jagersee. We did an hour walk around it and then had lunch overlooking the lake.

After the lake we drove to Sankt Johan am Pongau for some icecream. And since we walked past a shoestore I took my change to forfill one of my missions. By a new pair birckstocks. My old ones I wore daily for years had fallen apart. I got a nice set with black leather. Henry shopping: in and out in 5 minutes.

We got some Gelatos and then drove back home.

Saturday Seppi and I went for a ride to Sankt Johan. That meant we had to descend down from Werfenweng to Pfarrwerfen. Then we followed the to Bischofshofen and then on Sankt Johann in Pongau. There we stopped at a bakery for a cappucinno and a pastry. Then we looped back thru Sankt Johann back to Bischofshofen When we started the climb back to Werfenweng I coached Seppi with a climbing technique by switching between seated and standing climb positions. I did really well and despite not having ridden his bike all season got close to his pr.

I wanted to do some more riding, but not take away time from being with Florence and Seppi. So when Seppi proposed to go for a lunch in Wals near Salzburg, I proposed that I would ride out if we could bring the bike back on the car.

Seppi was was ok with that and so I rode 40 miles from Werfenweng for 2.5 hours and arrived at the restaurant at exactly the same time as Seppi, Florence and Paula by car. Seppi's parent Sep and Rosie joined us for lunch. The food was rich and good. I like Seppi and Sep had the schweingebrat, lots of meat.

After lunch we went to a lake for swim. A pretty popular spot for Austrians, but we found a small spot still available, where we put up the parasol. We stayed not too long but we had a couple refreshing dips in the water.

The next day we were leaving to return through Germany back to Holland. Before we left we did Florence's favorite 3 mile hike by their house. When we returned we filled up the campervan's water tank with fresh Austrian spring water.

We drove north and had planned to meet my friends Meinder and Heleen at the Stiegl brewery in Salszburg. They were vacationing with their campervan near Salzburg and were biketouring in the area. We had seen Meindert a few weeks ago in Holland during a ride. But Heleen we had not seen in a long time, so we spend some time catching up about kids, family and work.

After a quick visit to the Stiegl brewery store we continued our ride in search of the Danube.

Last part of camper van trip, from Austria through Germany back to Holland with 3 overnights in Germany. 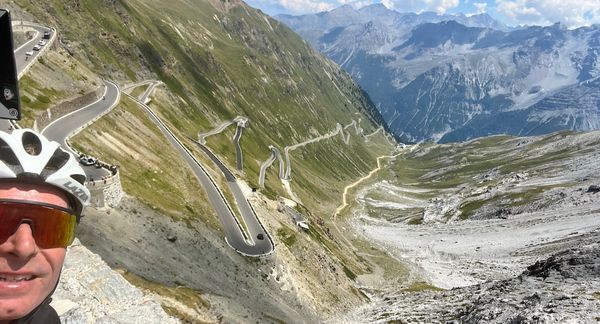