Decided to extend the training block with an extra week, as this weekend we were in Vermont with lots of cycling. Having a rest week did not seem to make sense. We'll have a rest week next week.

The week started with the NCC time trial series on Tuesday.  This week we did the Pelham climb. A 5.3 mile climb from the outskirts of Amherst upwards Shutesbury. Since I had meeting until late in the afternoon, drove near the start and parked at Cushman's, which gave me a 4.5 mile stretch to warmup.

I wasn't sure where the start was, I remember from the website it had said that there were 2 mailboxes. I had forgotten my phone and therefor could not double-check the photo of the start. In the end it turned out I had picked the wrong mail boxes to start. The climb itself was again hard to do as it was rolling and I had trouble keeping the power on the pedals. I think the good form I had on Saturday and Sunday had withered.

In the end I timed the climb in 21:34 with an average speed of 14.6mph and a avg power output of 271 watts. But that was from the wrong mail boxes which were 0.2 miles further from the official start. So I had to use my Stravsegment time which was unfortunate as it had included me setting up for the start costing me almost 1 minute and then the NCC Strava segment correction. Resulting in a "official" time of 23:07.

On Wednesday morning did my regular run. I took it a little easier as my left hamstring was bothering me. Then in the afternoon after work John and I did a quick ride at 5pm. I had to be back by 6pm for a meeting. Turned out it was good we had a deadline as we got caught by a thunderstorm and barely kept it dry.

On Thursday had to go to Lexington and did not ride Thursday and Friday. On Friday I drove to the Bike Barn in East Burke Vermont. We gathered there with a number of friends to ride up Mtn Burke, the roads and the Kingdom trails.

Saturday morning early we went up Mtn Burke 2400ft of elevation in 5 miles. I had brought the Honey which I used for the Time trials as it was lighter. Turned the gearing was not ideal going up Burke. On the steeper sections had a cadence of 45-50rpm which did not allow me to put out much power, just 200-250 watts. Also the saddle was not ideal it was pointing up too much. As a result I was just under 2 minutes slower than my fastest time with a time of 30:01 and average wattage of 251. The smallest gearing was 34 in the back and 36 up front. Not quite 1:1. Next time will need to fix that.

After breakfast we did a 65.5 mile ride towards Craftsbury, with 6500' elevation a long and hard climb. We stopped in Crafstbury for lunch and had a great sandwich.

On Sunday rode with Paula, Gary and Sarah for a short 13mile rt which we had to improvise a little on as it had a gnarly stretch the group rather did not do. This resulted in a detour on rt 5 but was made up by a nice section along Carter rd and the beautiful views along Burke Green rd.

I had brought my fat bike and after luch I went for a quick ride on the Kingdom Trails. I had bought a KT yearly membership online. Since this was the first time took some easier trails did a loop along Wares Davis, Upper and Lower pond and then back to the barn on White School. 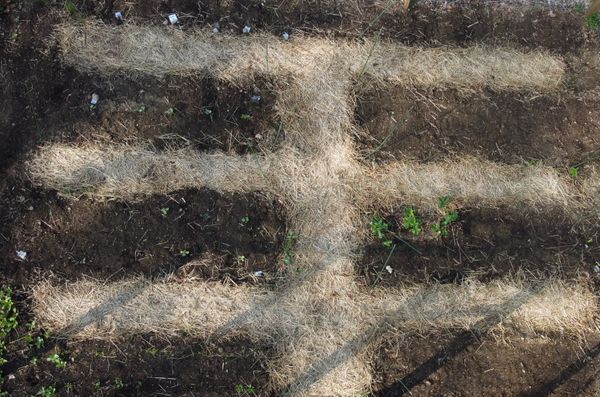 May update on our vegetable garden. Plants seeded and planted