Today we arrived at our first destination after many the journey is the stops. We drove from south of Lyon to the base of the mont Ventoux to a campsite called camping mont Ventoux.

Along the way we worked on our supplies. Before going on the highway we bought groceries and when we came of the highway we found a gas station and filled up out diesel tank and blue fluid. The latter helps diesel engines burn cleaner.

We arrived at the campsite one and half hour before the reception opened up at 3pm. But since the gate opened we found a spot partially in the shade. For this campsite I had made reservations ahead of time.

After our lunch I whipped up a 20 mile bike route with ridewithgps. The OSM cycle map showed some route that closely passed the campsite. I wanted to recon the start of the ride up the mont Ventoux in Bedoin I planned for the next day.

The route brought me along small little farmer roads through the vineyards and olive tree fields. When I arrived in Bedoin, I found a bike shop as I needed some air cartridges and a pair of cycling sunglasses.

The route then brought me to Louiron which had some beautiful little streets and from there rode to Mormoiron and from there back to the campsite. Apparently I missed the oppurtunity to see the Gorge de la Nesque. Unfortunately we did not have enough time / energy to go back. Next time.

It had been 90+F all day and after a shower jumped into the pool to cool off. There was a great view from the pool to the Mont Ventoux.

When we came back from the pool at was already 7:30pm and still warm. Since the restaurant at the campsite was closed. Paula made some ravioli and we prepared a salad.

After dinner we did a short walk to a nearby vineyard where they host wine tastings. It was closed now, but perhaps tomorrow.

After one last look at the mount Ventoux at sunset it was time for bed, as an early day awaited me.

I had set the alarm clock for 6:30am with a planned start of 7am. But I woke up just before 6am and decided to leave even earlier. After some tea and some leftover apple turnover I rode the first 6 miles to Bedoin where the climb started. In Bedoin I stopped for a cappuccino. I probably should have ordered a double espresso. Also the barista did not look too happy with the order. Looking around all the locals were drinking espresso. And it was way before 11am, guess it is not Italy.

Right at the center of town the climbing started. I was planning to keep a sweetspot pace and with pace I was overtaking some riders. After passing through a small town I rode into the forest that flanks the mountain. I created a rhythm of 100 breaths seated followed by 20 breaths standing to change up the muscles. This worked well for the first hour or so, but then my back started hurting.

I had been drinking water and a hydration mix with some glucose but now it was time to eat a bar. After eating half a bar my back pain subsided a little.

This was also the point I got overtaken by the first rider. He wore a jersey that said "de gouden ketting" (the gold chain). So I jokingly called out to him: "I hope that chain is not to heavy". He chuckled and we wished each other a great climb after which he slowly disappeared in the distance.

I deliberately had not been looking at my distance, nor time. But by now was wondering when I would see Chalet Reynard. After seeing some glimpses of the top through the trees I finally turned right and saw the chalet appear. There was a lady with 2 little children that came out the car and almost looked like she was going to cheer me on, but it turned out that it was for the rider 100 meters behind me.

He overtook me just past the chalet when I had dropped my chain. Now out of the woods the sun started to become a factor. Occasionaly I would be out of the shade and felt my energy levels dropping. I think also the altitude started playing a role.

While I could see the top I still had 4 miles to go and started to suffer. My back was continuing to hurt and I had to move to 50 breaths seated and 20 breaths standing. At that moment another rider passed me. He looked at me and I tried in my best french: 'C'est dur he". He then smiled and said "bonne journee".

A few more switchbacks and I was at the top. The views were magnificent. I tried to take photos, but decided against it as I needed to keep moving.

With 1.5km from the top was thinking of the monument of Thomas Simpson. I tried to remember where it was. 500 meters later I had the answer. I quickly pulled out my phone for 2 quickshots. I originally thought to ride back from the top but that never happened.

Almost at the top, I saw people riding along the tower of the peak. It reminded my of the Strava recreation of the mt Ventoux where you ride along it and then turn back. That turned not to be the right way. Just before the tower there is a steep left up to the building and a right along it.

I took the right. Which was the wrong way. Once I realized my mistake I was almost on the way down the other side again. Fortunately there was a bike path back to the real top. Worried I missed some Strava segment went down to where I missed the turn and then went back up.

After taking pictures and walk around, I ran into my "Gouden ketting" friend and we chatted for a bit. I took some pictures of him and his friends in front of the Mt Ventoux sign. And his girlfriend took took some pictures of me. They were from Belgium and there call taken a picture: een plaatje trekken (to pull a picture).

At that time (9;30am) the little souvenir shop opened up and I bought some water and lemonade. After completely exhausting both my water bottles during the climb they needed a refill.

It was time for the descend. I had it routed down the backside of the mountain to create loop. I got the route from DC rainmaker who had climbed Ventoux a few weeks before.

With my bike's rim brakes I did not want to take any changes of them overheating (and blowing out a tire) so I took it easy, I never let the speed build up too much. This was also a good opportunity to take more photos.

Not far down, to my amazement I saw a uni-cyclist ascending. He still looked very spiffy. At my next stop I mentioned this another cyclist. He mentioned that the uni-cyclist takes breaks and does extensive stretches.

During the remaining descend I saw many other cyclist going up: not only regular cyclists, but also folks of every age on mountain bikes, e-bikes and even regular city bikes.

I had not studied the route too well, as to my surprise there was a bunch of climbing to do and my legs were not agreeing with this.

I had rerouted the last little bit along some biketrails bike tot the campsite. The first section of 3oom was super hard mountain but after it became beautiful roads along the vineyards again back to the campsite.

I was back 11:30am. Time for lunch, nap, hanging around to pool. And another 12 miles for dinner in Bedoin.

It was great day and a slighty shorter bucket list.

Part three of our roadtrip. We stayed 3 nights at campsite Ferme Noemi in the little Sables near the town Le Bourg-d'Oisans. 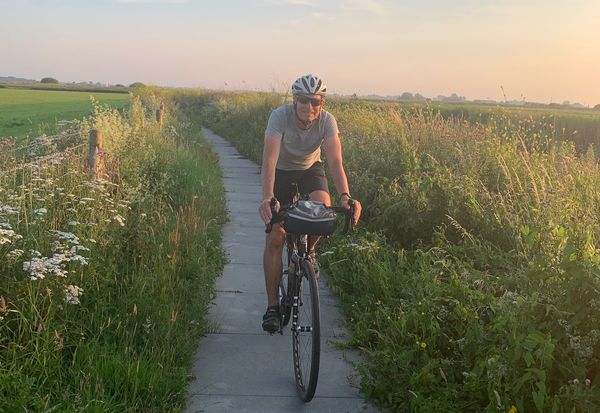