This was going to be a busy week with 2 cross races on the calendar: Night Weasels and Ghost.

Monday did an ez 44 min spin on the trainer as a recovery from the racing in Newtown the day before.

Tuesday morning did my regualar 2.7 mile run through town. It was getting cooler in the morning, but still did not need extra layers yet.

Later that morning I did an new interval workout. Eight 3min efforts at Threshold with a 1 minute break in between. The goal of this workout is to increase fatigue resistance. I was able to complete the workout, they were challenging but not too hard.

Wednesday went to the NCC CX training. This time we met with Ben and Sam to pre-ride the course for the Ghost race of upcoming Sunday. After 3 laps I went back as I felt tired, the others did another cool down lap. Since I was saving my legs for the weekend did not do a hot lap.

Thursday stayed completely off the bike to rest. And Friday did an abbreviated openers indoor ride on the trainer. Instead of 3 hard 30 secs efforts and 3 sprints. Only did 1 of each. This is an experiment to see if I can save some of that energy for the race. The shorter openers did not seem to negatively impact the next day's race.

The Night Weasels race was in Shrewsbury at the Ski wards ski resort. My cat4-5 40+ race started at 3:45pm and since I was very familiar with the course arrived such that I could take 2 preride laps in. My start was really good I came from 2nd row as the 5th through the first corner. Then came the long climb where I paced myself a little and a bunch of riders overtook me. In the past I would crash at least once on the descent, this time was more careful and did not crash. I saw Jeremy nearby and he was on my wheel for a while, until the first time going into the barriers me foot clipped back in and I came to a full stop against the barriers. I only lost 2 spots at that point and the bike was fortunately ok. Then came the tricky 3 beams on the ground, I had decided to ride them after a successful pass in the preride, now I burped my rear tire on the last beam. I lost a bunch of air fortunately not all and since I had not put the Seven spare bike in the pit decided to carry on. Wes (from my bike shop Bicycling world) and I were going back and forth. Due to the low tire pressure I had to take it easy in the corners and on straight gravel section. In the 2nd to last lap I overtook Jeremy again in the climb as he started to fade a little. In the end I finished 5th just behind Wes (who was in the under 40 race). Later checked the tire pressure and the rear tire had 18 psi in it. Not ideal for cornering. After the race volunteered from 5:30pm until almost 8pm at the registration table. And then drove the 90 mins back to Conway.

The next day had to race early in Amherst at Ghost. This was a Cat 1-4 50+ race with  some good competition. I was ranked 15th by cross results.  Before the race managed to get 2 pre-ride laps in. Legs definitely felt a little heavy. After watching the delayed Cat 5 start did a abbreviated warmup in the adjacent park.

The race had 3 categories 40+, 50+ and 60+ that started with about 30 secs in between. My start was not the best I was clipped in immediately but did not feel powerful, although did pass a few riders who get squeezed in the first left hand turn. The first lap continued to not feel strong but felt better in the 2nd. I thought I felt pretty comfortable riding the off-camber but looking at the photo below, I looked a little worried.

The last 1.5 lap I raced with the first 2 riders from the 60+ category and I was able to keep up with them for most of the remaining race. In the end finished, without any crashes, so felt good about the results.

After the race hung around a little as I had volunteered for podium duty, which turned out to be a very rewarding job, giving the racers their loot after their podium ceremony and a t-shirt for me.

Here some more photos from the race from Jeff Dieffenbach

Jeff made some great photos of the Ghost race, check them out here at smugmug. He als blog about cycling at dieffenBIKE and photography at Deep Brook. 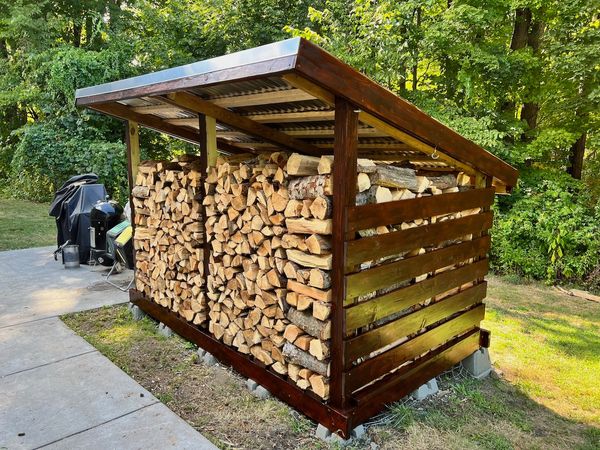 Build a 10x6 foot wood shed with a storage capacity of 2.2 cords of wood.