I had planned to stay until Tuesday in Burke, but the weather was dreadfull on Monday and I decided to drive home earlier. Hence no riding on Monday.

Tuesday I did a 40 min spin on the trainer, to recover a bit from the hard week in Burke.

I attended the regular NCC cross training in Amherst on Wednesday. I was a little late. The group had already left for the first lap, and we I ran into to the to my surprise saw my Pedal Power team mates Jenny and Shane who joined us. Also Melissa was there who I had not seen in a long time. I kept it easy as I was still a bit tired from last week and needed to preserve some energy for the upcoming hill climb race in the weekend.

Thursday did a 15.5 mile spin in the valley, nice and flat. And on Friday did openers for race the next day. I used the road to the Bardwell Ferry bridge for this. I has some nice prolonged climb sections that could be used for the hard efforts.

Saturday morning Paula and I drove to North Adams to the NCC Graylock hill climb race. My start was at 9:35am and we arrived around 8:30. I did a warmup by riding to Adams and back.

There were a lot of folks warming up along the same road. 15 minutes before the race I took my energy gel and then lined up for the start. The riders left with 20 secs in between. My plan was to ride an average of about 260 watts, on the steeper sections with a higher power output and the less steep/flat sections with a less power to recover. This worked well in the beginning, but he last third got tired and could not keep the power numbers. In the end finished in 58 minutes, under an hour (goal 1) and faster than last year (goal 2) but not in the 54 minutes I aimed for wih the average power of 265 watts. I averaged 250 watts, so there is still some room for improvement.

Paula welcomed me at the finish line, she had brought some luggage up for the other riders.

After snacking, chatting with other riders and enjoying the view from the top, I descended down on my bike.

After a quick change of clothes went to the after party where they had food and beer. We saw the podium presentations of the winners, I was not even close. The winner in my age group had a pr and an age group best under 45 minutes. Yikes.

In the afternoon we visited the Museum of Contemporary arts which had some nice exhibits and had a drink at a road-side cafe overlooking North Adams.

Sunday did another easy spin while watching highlighs of the Formula I race. 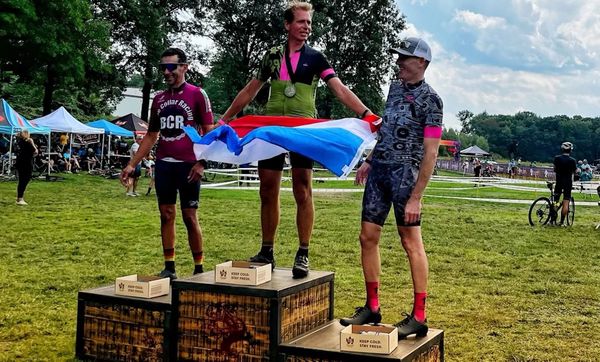 This week did 2 indoors rides and 3 outdoor rides. Did 1 cross training, prepped, raced and won my home race at Treehouse in Deerfield. In total 170 miles and a TSS of 603.