Monday started out with spinning out the legs for 40 minutes on the trainer while watching a Ted Lasso episode.

The next day did the NCC hill climb. This time we raced the 10 mile Epic KOM  segment. I kept my pace in sweetspot zone again, to keep the heartrate down and save the legs for Saturday's race. I finished in 25:22 about 1:30 slower than my fastest time. I ended up 5th out of 10.

Wednesday morning went for a quick run, this a 2.2mi route I had not done in a while. Along Elm street then, Sherburne falls rd, Emerson Hollow rd and then back along route 116. Legs were still tired from the leg strength training workout and hill climb  from the day before.

Thursday spun out the legs again on the trainer for another 40 minutes and then drove to Arlington. He had an eye exam on Friday. After  the exam drove back to Conway and did openers on the trainer. What I noticed during the three 10s sprint intervals was that I could average my power output around 800watts with a peak of 950watts. That is the first time I was able to do that on the trainer. Normally I could not get above 700 watts.

Saturday I had 2 races at Ice Weasels. First the 55+ race at 11am. There were a number of friends racing including Mike, Will, Greg, Vlad and more. We started together with the 45+ racers. I had a good start and was about 10th thru the first corner. But soon, still in the first lap, my chain dropped in a bumpy section and it took me a while before I had the chain back on. Then the catchup race began. The race then went without hickups and ended in 6th place.

The 2nd race was the fat bike race, unlike the week before, there were a lot of fat bike racers. Soon after the start I noticed my legs were tired and decided to make it a fun race (The fireball shot I had earlier must have had somethig to do with it). Highlights were riding the not "Probably not a good idea" beam a few times and  taking handup shots. All in all a fun end of the season.

Sunday went for a mountain bike ride. Mike had brought 2 mountain bikes, so I could ride one of his bikes. We met up with Jason, Sean, 2 Johns and an ex pro mountain biker who's name I forgot, in the center of Conway. We then went up Old Cricket hill rd and took some trails in the Conway forest. After a fast descend thru a brook, I got a puncture from a sharp rock. We were able to fix it with a plug which made the sealant do its job. Shortly after that Mike had a crash and hurt his wrist. He also broke off his right shifter. So Mike and I decided to call it a day. While the others continued we carefully worked our way back to Conway. 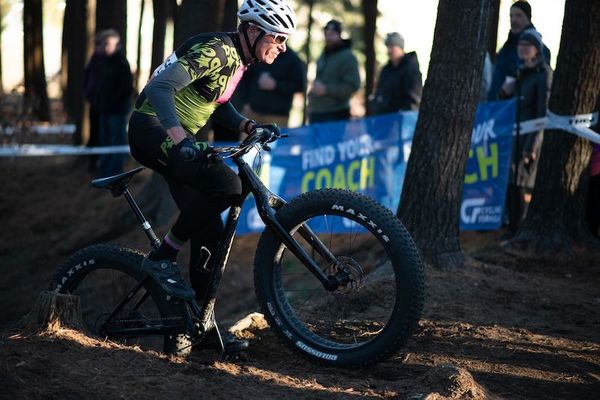 After last recovery week back at it. 2 cross races, an indoor time trial and some fat bike training. Ran the short loop in Conway. Had a TSS of 496. Cover photo Katie Busick.