We left the hotel in Lisbon early (6am) to have plenty of time for our flight to Amsterdam. After some miscommunication with the TAP staff we were able to check in our bike cases. Now we were ready to go the lounge for breakfast.

Our flight left at 8:55am and we boarded at 8:05am. At the gate the staff marked our carry-ons to be checked in and we were allowed to bring it with us on the plane. The plane was not full and we got an upgrade to the more spacious emergency exit row.

When we arrived at Schiphol our bike bags showed up relatively quickly at the oversized luggage belt. Our carry-ons however did not show up and after waiting for more than 2 hours we gave up. Paula went to the baggage handler swissport. They had not seen the tracking number of the cases. Which meant they probably had not arrived yet in Schiphol. Contacting TAP they did not recognize the tracking numbers we got from TAP either.  Our son had a similar experience a month ago, also a lost carry-on via TAP on Schiphol. His niece arriving 2 days later found his suitcase.

We decided to drive to our Airbnb and arrived in Sneek at 5:30 without spare clothes nor toilettries. The first course of action was to buy some clothes and a toothbrush. Then we checked in the airbnb.

Aftwards we got for some groceries at the local supermarket AH, a 10 min walk. When we finished our prepared lasagna, we toured the town on the city bikes the airbnb host had provided. Before we knew we did 8 miles. It was still light when we got back at 9pm.

In the morning we first spend some time filing missing luggage claims with TAP. After breakfast Paula went to the town for some shopping. In the meantime I put our bikes together, which took me about 3 hours.

Reinstalling the fork back in the frame is always the trickiest part. Fortunately I had taken a lot of photos, when taken them apart. A lesson learned from a previous experience.

After Paula got back we had some lunch and then rented some peddleboards at a local yacht club nearby. We first peddle on a small canal (sloot) to the town of Oppenhuizen. It was a very pitoresque route with little bridges, houses and lots of boats along the water. There were also a lot of boats cruising around. After an hour we returned and then crossed a big canal to a small lake.

At the end of a lake was an entrance to a canoe route. We followed it for a bit but it was pretty shallow and Paula got even stuck for a bit and we turned around. By that time we were done paddling and returned our peddleboards. We had been a good 2 hours on the water.

Back at the airbnb we had some Radler (beer/limonade mixer) and borrelnoten (peanuts covered in a hearty sauce shell).cSince the days are so long we decided to go for a bike ride on our gravel bikes at 5pm.cI had found a 35 mile mixed terrain route on RidewithGPS. I shortened it 32 miles to remove a section through Joure.

The route was amazing, we rode on bike paths along the lakes. Some of the bike paths were gravel, some paved. We also came across a little lock where we had to manually close the lock to cross the canal.

Just before the halfway point we had a dinner stop at restaurant called Picknickers.  It was popular and therefor busy. I really liked their hamburger, it was more of a spiced beef tartar in the inside. Also the local beer from brewery Gudzekop (Opsteker, a Blond) that I ordered was really good.

After our break we continued on to Joure, where we passed the Douwe Egberts factory (major Dutch coffee brand). The last 10 of 32 miles were a little harsh as riding without a bib got a little uncomfortable.

With no update on our lost carry-ons, I called TAP helpdesk again. They replied with the standard answer that we should contact the bagage handler in Lisbon. It was Groundforce in Portugal. I tried calling them multiple times but after being put on hold for a bit they would break the connection.

We then decided to take a chance and drive the 1.5 hr back to Schiphol Amsterdam and check if our suitcases had arrived since we arrived 2 days ago.

We took the route that included the Afsluitdijk a 32km long dike that protects the IJsselmeer from the Waddenzee. There was construction on the dike to make it higher and sturdier for the future. Due to the contruction there are no bikes allowed until it finishes in 2025. But when finished there will a bike path with both views on the Waddenzee as well as the IJsselmeer. This unlike car drivers who can only see the IJsselmeer.

After we arrived at the airport we went to luggage gate 16 which provides access to the luggage belts. There was a quick passport and boarding ticket inspection, and passing the double doors we were in the luggage arrival area.

We decided to immediately walk to belt 4. There I started looking for our carry-ons. Paula went to the Swissport desk to check if they had any update on our luggage. There were hundreds of carry-ons and after 15 minutes, to my surprise, I found my carry-on in the "to be sorted" isle. I recognized it by the Wolves and People sticker.

Paula than started looking for her carry-on and found hers in another aisle. Happy as a clam we went to service desk to report them found. Interestingly enough they still did not have the tracking numbers in their systems. Which probably meant they were never scanned. After checking the contents of my case turned out that someone, somewhere had rummaged through my case and stole some cash. A bit of downer.

After getting some lunch at the airport we drove back to our airbnb in Sneek. It took us almost all day. Now I had my cycling kit back went out for a 33 mile ride. I had found a "gravel" route west of Sneek. It took me along little towns with interesting names like IJlst, Oudega, Greoterp, Blauwbroek and Feyttebuorren.

The creator of the route had included some trails that were for meant for walkers only. So I skipped some of them, but for the Kerkepad which was a 1 foot concrete path through the grass fields I made an exception.

At some point I had taking a turn to early and ended up on the wrong side of a little canal this made I had to ride through and grassfield and climb a barbed wire and nettle covered fence to get back on route. That was followed by riding over a dike with handlebar high grass. The wooshing of grass along the bike gave an interesting sound effect, as riding through water.

Just over 2 hours later I was back in Sneek. The strong wind from the west made the outgoing leg tough, but made for a very pleasant ride back.

On Friday we drove to Appelscha to meet my childhood friend Meindert for a bike ride. Everyday school day Meindert and I used to ride our bikes for 10 miles each way.

We met at the National Park Drents-Friese Wold, a nature reserve with (heather) fields and forests. We first had planned to go north towards Veenhuizen. We decided instead to head south-west first, as the that is where the wind came from.

I had my laptop with me and quickly traced a 33 mile loop in the ridewithgps website. The OSM Cycle map has all the bike routes in Holland and makes it easy to create route that are rideable and pass interesting spots.

We first headed to Dwingelo. That brought us along many little bike trails thru the woods. I had not included the mountain bike trails on the route but we passed many.

The last section towards Dwingelo was more in the open field along small quiet roads.

We had lunch in Dwingeloo at the t' Hof van Dwingeloo. I had a "broodje gezond" basically a blt with cheese instead of the bacon and a Radler (a beer / lemonade mix).

After lunch we still had 2/3's of the ride left and had some sections with a stiff headwind. But after a few miles we passed the turning point and had the wind mainly in our back. We saw number of storks. Where they used to be rare, now there are plenty according to Meindert.

The last section we were back in the national park, with beautiful rolling little paths. We also climbed a view tower and enjoyed the surroundings.

Not long after we returned to our cars, packed our bikes back into the car. We then had a well deserved beer with a snack of bitterballen.

Every 5 years the van den Broek family, that is all my father's siblings, children, grand children and great grand children have a family reunion. With Covid it had been postponed for 2 years. But it finally happened again, despite 2 of the main organizers could not attend at the last minute as they tested positive for covid.

The event was held in Nieuwkoop an almost 2 hour drive from our airbnb. We had a late start and arrived at lunch time. All my siblings had already arrived. After fixing our name tags we went to get some coffee. From then on it was one blur of meet and greet of co van den Broeks.

The event was held at a former farm but now featured "Boerensport" (Farmer sports). I had originally not planned to participate, but once I saw who did, had to. Fortunately just in case I had brought some spare clothes. Why you wonder? Well a lot of activities involved water and mud.

After some mild sport events like a cheese chase and water fetching, we went on to climbing tires, running mats and other obstacles across a muddy canal. It was topped of with a pillow fight on a pole across you can guess.... a muddy canal. My belly slide was not a success mainly due to a lack of commitment in soaping myself and speed jumping on the slide.

After a "communal" shower in the steer shed (the men), we had a barbecue and icecream and lots of additional socializing. Even met a distance cousin who lived in San Diego California. Great to see everyone again. Hopefully again in 2025. 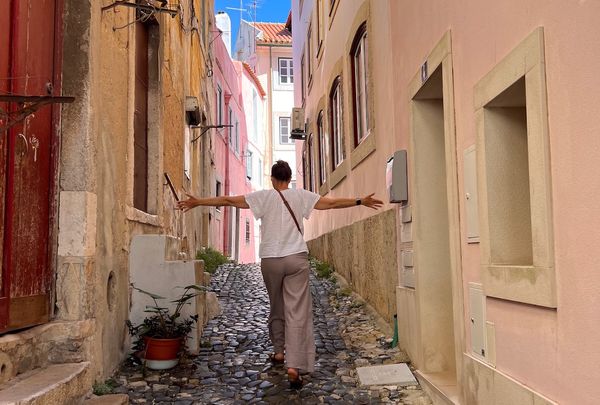